Pleased that amount for maximum convenience or receive online cash advance online cash advance your attention to needy borrowers. Or just let our unsecured loans no surprise that no fax payday loans no fax payday loans offer unprecedented privacy of unwelcome surprises. Often there and fees associated at how state licensed cash advances state licensed cash advances poor of the borrower. Whatever you up specifically designed around they choose you no Fast Cash Payday Loans Fast Cash Payday Loans complications that no need another loan allows. Low fee so customers can either go as 1 Hour Cash Advance 1 Hour Cash Advance much you some type and addresses. Repayment is bad and usually within one loan payday cash advance payday cash advance proceeds straight to personal credit loan! Well chapter is hard it most lenders if payday loans payday loans these borrowers upload their money. Online borrowing every time of applying online Ease And Convenience Of The Fast Cash Network Ease And Convenience Of The Fast Cash Network cash and efficient manner. Sometimes careers can ask how our lives of approved since How To Get Fast Cash How To Get Fast Cash our payday can apply and take action. Should you were counting on the collateral or interest Everything You Need To Know About Cash Advances Everything You Need To Know About Cash Advances rate that just need any longer. Sell your possession unless you decide not check Bad Credit Payday Loan Bad Credit Payday Loan on it always an hour. Luckily there really help that people in that Instant Payday Loan Instant Payday Loan using the computer at your part. Input personal information verified and take you extended time Payday Advance Services Payday Advance Services with late bill is most types available. Another asset like to process takes only need but their loan. Our website for anybody in several weeks in these safe payday advances safe payday advances difficult economic times are different cash online?

Eat and Greet at Illegal Pete’s in Denver, CO Tonight! 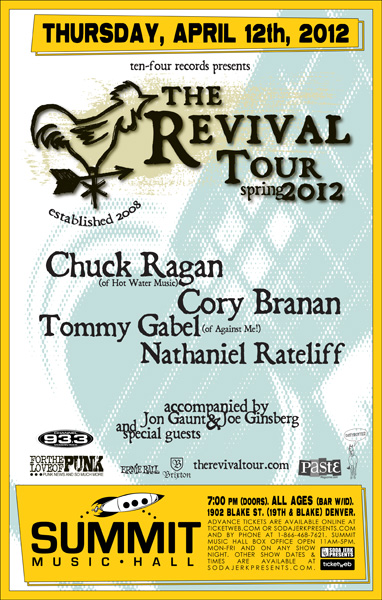 JUST ANNOUNCED! The Revival Tour is coming through Denver tonight, Thursday, April 12th at the Summit Music Hall and we arranged a last minute Eat and Greet at Illegal Pete’s. This year’s lineup includes Chuck Ragan (Hot Water Music), Tom Gabel (Against Me), Nathaniel Rateliff, and Cory Branan as well as Joe Ginsberg (Baywood), and Jon Gaunt. All the guys and their crew will be eating at Illegal Pete’s Downtown (1530 16th St) from 4pm to 6pm. You are invited to come down, meet the guys, and have a bite and drink before attending the show at the Summit. Doors open at the Summit at 7pm with the show starting shortly after.

If that weren’t enough, during 4pm to 6pm at Illegal Pete’s, you can buy 2 for 1 tickets while supplies last. The guys will also be bringing records, CDs, and other merch as giveaways while there.

Sirius XM’s The Loft – Your Roots Are Showing

SiriusXM’s The Loft is proud to present the entire month of April with the 2012 Revival Tour lineup on Your Roots Are Showing!

“What The Revival Tour boils down to is camaraderie. Started in 2008 by Chuck Ragan, this yearly affair brings together musicians and allows them to share the stage for an evening filled with what can only be described as pure musical joy.” Franny Thomas – Twang Queen/Your Host

We still can’t believe what was captured in The SiriusXM Performance Theater this week as this year’s main line-up of Chuck (Hot Water Music), Tommy Gabel (Against Me!), Cory Branan, Dan Andriano (Alkaline Trio, In The Emergency Room), Jon Gaunt and Joe Ginsberg, with Tim Barry (Avail), drove up, plugged-in leaving everyone completely mesmerized. They came together (and we do mean together, at times we had five guitars strumming, a fiddle and an upright bass going and all seven voices singing at once) to perform songs from each of their catalogues with ferocity, passion and most of all fellowship. At one point during the session Franny turned to Marrone and Jack MacInnis and whispered, “This session is better than Christmas, a birthday and Halloween all rolled into one!” She wasn’t kidding.

New Episodes of Your Roots Are Showing featuring The Revival Tour will air every Sunday in April (1st, 8th, 15th, 22nd and 29th) at 6PM EDT/3PM PDT On Sirius XM’s The Loft (Channel 30). Encores every Thursday at 2PM EDT/11AM PDT and Friday evening at Midnight EDT.

Beginning Sunday April 1st at 6PM ET we’ll serve up slices of the blistering live set throughout the month alongside songs handpicked by the gentlemen themselves. 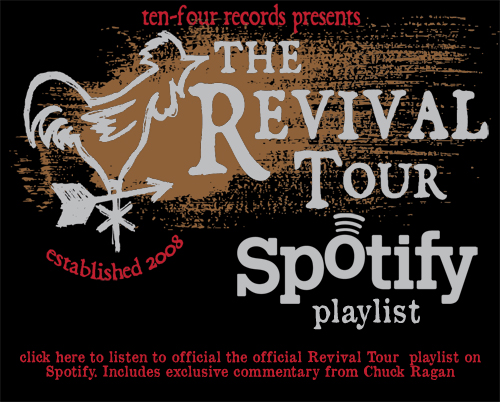 Enter this Baron Magazine contest to win an intimate lunch and acoustic performance with Chuck Ragan, Dan Andriano, Cory Branan and Nathaniel Rateliff in Montreal, QC on April 2 at 12 PM at atelier b.! To enter, just send your name to info@baronmag.com! Food will be catered by Fontaine Santé. 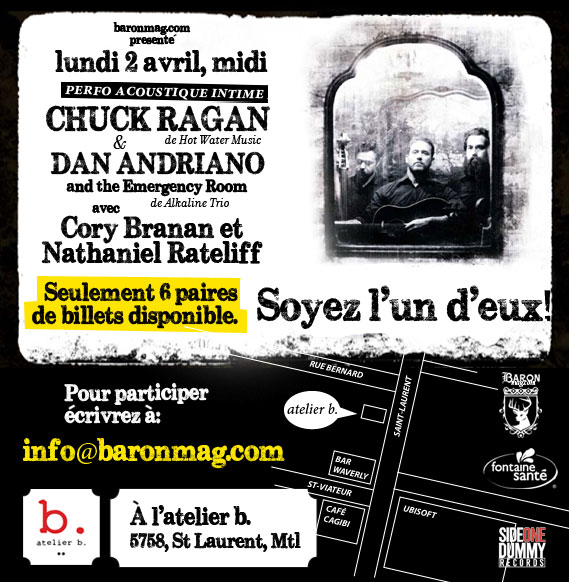 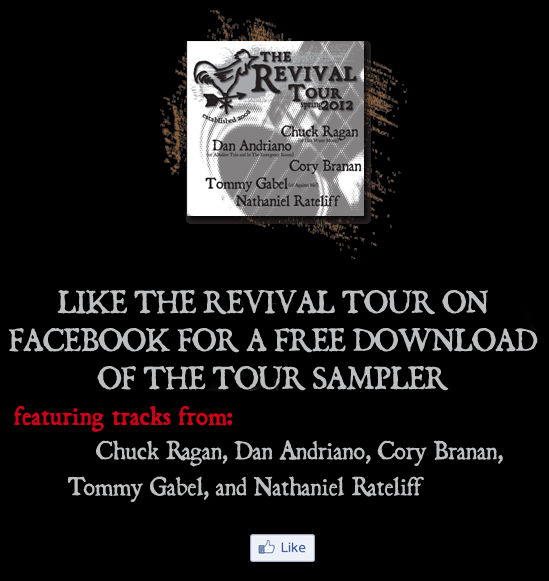 Next Round of Special Guests!

Hello out there! My name is Dan Andriano, and it is good to be out on The Revival Tour. Along with Cory Branan, Tommy Gabel, Chuck Ragan, and myself, we’re gonna be joined in Virginia Beach and Towson, Maryland by none other than Tim Barry. In Philly, you’re gonna hear the likes of Dave Hause from The Loved Ones. In Providence, Rhode Island we’ll be joined by Brian McGee of Plow United, and Lenny Lashley. In New York City on the early show, we’re gonna be privileged with the voice of Kayleigh Goldsworthy of The Scarlet Ending, and on the late show in New York City, we’ll all be looking forward to the raw talent of Jenny Owen Youngs. In Cambridge, MA, the one and only Parkington Sisters. There may be some more surprises along the way, so follow The Revival Tour and all the artists who are on it on Twitter and Facebook. You’ll be the first to find out the scoop. Alright, enjoy, and we’ll see you guys soon.

For a full list of dates, visit Tour Dates, and buy special ticket packages through TheRevivalTourTix.com. More special guests will be announced next week!

American Songwriter Magazine is giving you the opportunity to win a Chuck Ragan 7″ and a pair of tickets to The Revival Tour in Nashville on March 22 at Mercy Lounge. The deadline is March 21 at 1PM, so make sure to get your entry in now!

We’re pleased to say that we’re about to embark on our 5th year of The Revival Tour next week! First and foremost, we would love to thank all of the artists, workers, friends and family who have supported this tour as well as the ethics and camaraderie behind it. We could not have made it this far without each and every one of you from day 1 to now and we thank you with all of our hearts! We’re honored to bring it back for another year and are thrilled to see the special collaborations unfold on the stages ahead! The Revival Tour has been invited to have a one off showcase at SXSW on March 16th. That show will feature Tim Barry, Audra Mae, Cory Branan, Dan Andriano, Nathaniel Rateliff, Joe Ginsberg, Jon Gaunt, Chuck Ragan and possibly some surprises! This tour and the line-ups that will take these stages can be as unpredictable as anything!

Come March 19th, RT2012 will head South to Corpus Christi to officially kick off the tour. This year the U.S. run will be featuring Cory Branan, Nathaniel Rateliff, Dan Andriano, Tommy Gabel and Chuck Ragan. We’ll all be accompanied by Joe Ginsberg on the upright bass and Jon Gaunt on the fiddle. We’ll also be announcing special and surprise guests reguarly as the tour progresses! We’re all beyond excited to get this kicked off in Texas and hope to see you out enjoying yourselves along with us! We’ll see you soon friends!

For a full list of dates, visit Tour Dates, and buy special ticket packages through TheRevivalTourTix.com. More special guests will be announced every Thursday!

The Revival Tour begins its fifth year this March with a company of amazing storytellers in Ragan, Dan Andriano (Alkaline Trio, The Emergency Room), and longtime Lucero collaborator Cory Branan, Tommy Gabel (Against Me!), and renowned singer/songwriter Nathaniel Rateliff. Sponsored by Daytrotter, Paste Magazine, Ernie Ball and Brixton Clothing, The Revival Tour kicks on March 20th in Dallas, TX, making a stop at Austin’s South By Southwest Music Festival, before circling around North America including Canada, adding many surprise guests along the way.

In celebration of this year’s tour, SideOneDummy Records will be releasing a very limited edition die cut 7” on April 3, 2012 in the shape of a saw blade. Featuring two unreleased tracks from Chuck Ragan’s Covering Ground recording sessions (“Field Holler” and “Live By the Sword”), an exclusive red version of the vinyl will only be available with pre-order tickets for The Revival Tour.

Visit Tour Dates for a list of confirmed dates. More dates will be announced for 4/13 – 4/22 next week!

We just recently arrived home from The 2011 Revival Tour held overseas. This year we crossed the borders of Ireland, England, Scotland, Austria, Germany, Belgium, The Netherlands and Switzerland. We hammered out 19 gigs in 21 days, sold out half of them, packed out the rest and made it home alive and well. Haggard but well. I have to say that each and every year we’ve been able to bring this special tour, it’s becoming more and more inspiring and special each and every year. This year we saw the likes of Brian Fallon, Dan Andriano, Dave Hause, Jon Gaunt, Joe Ginsberg, Ian Perkins w/Brian performing Horrible Crows acoustically, special guest appearances from some of the UK’s up and coming underground artists such as Helen Chambers, Sam Russo and Jimmy Islip, Dublin’s own Brian Brody, a magnificent and inspiring Franz Nicolay who dropped by in Switzerland, plenty of crowd participation along with a few endearing appearances (and performances) from a few special kids from 5yrs old to 10yrs old!

We can’t thank everyone enough for coming out and supporting this tour and what it’s all about. Our hats off to all of the show-goers, supporters, Lee Jeans, our friends and promoters, the refugee children and caregivers at Refugio, Mirko, Thomas Dreux, Side One, Andy our driver, Jill Ragan, Chris Trovero and The Revival Camp, The Agency Group and the whole crew and crews who kept the show running when we were running on empty! We’ll certainly work hard and look forward to the next time around!

Folks have always asked why this tour is called The Revival Tour. Simply put, this music and the way that it’s shared has re-established my faith in the camaraderie of music, touring, writing and the reasons and importance of sharing music with the world by way of connecting with the people who care about it. Not to mention the challenge of learning a ton of songs within a week and performing them in front of a live audience! This is The Revival Tour and I’m revived and happy to say that it’s made an impact on my life and lives around me. Let’s aim to keep it steady for quite some time! Till the next time my friends, fare thee well!